2 Bucket List Events in One Trip!
Famous Oktoberfest in Munich, Germany
and a Luxury European River Cruise in 2019

Check out Your Cruise! (Rhine River)

Detailed Itinerary Below:
Day 1 – sat, Sep 28, 2019 - Depart the USA
Today we depart the USA for your overnight flight  (hopefully on Free Air) to Munich, Germany.  Enjoy your flight!
Day 2- sun, sept 29, 2019 - munich, germany - oktoberfest
Day 3 - MON, Sept 30,  2019 - munich - city tour and oktoberfest
day 4 - tue, oct 01, 2019 - munich to Nuremberg, germany - board ship
day 5- WED, Oct 02, 2019 - Bamberg, germany
day 6 - Thu, oct 03, 2019 - wurzburg, germany
day 7 -FrI, Oct 04, 2019 - Wertheim to Miltenberg, Germany
DAY 8 -SAT, OCT 05, 2019 - rudesheim and Koblenz, germany
Day 9 - Sun, Oct 06, 2019 - cologne, germany
Day 10, - mon, oct 07, 2019 - Amsterdam, netherlands
Day 11, tue, oct 08, 2019 - return to usa
What's Included in the price?
What's not included in the price?
will I get seasick?
It’s highly unlikely that even the most motion sensitive people will suffer from seasickness on a river cruise which is why River Cruises are perfect for the Non-Cruisers. The rivers in Europe do not have much motion to them at all, and the river ships are extremely stable. If you are prone to suffering motion sickness from even the slightest movement on the water, try Sea Bands or take an over-the-counter motion sickness remedy. The good news is, 99% of river cruisers barely notice the ship is cruising – so you’ll probably be just fine.
​
What travel documents will I need?
Proper travel documentation is required at airport when leaving the USA and throughout your vacation and is the responsibility of the guest.  Any guest traveling without proper documentation will not be allowed to board the plane or vessel and no refund of the cruise fare will be issued.

Required Travel Documentation:
You’re required to carry:
A Valid Passport (expiration date should be at least 6 months past your travel dates)

Passports for guests under 16 years old are valid for 5 years and for 16 years and older are good for 10 years so if you don’t have a passport it is a great investment for you and your family as it is required for all international travel and can be always be used as another accepted government approved ID for many other uses besides travel.  It is important that guest names on travel documents be identical to those on the cruise booking.
Please check with your country of citizenship's consulate or state department for current information and travel requirements.  For more information on the proper travel documentation check out the Cruise Line’s website or the resources below.
Resources:
U.S. Department of State Passport Information
U.S. Customs & Border Protection
CIBT Passport & Visa Services (Third party company that is very helpful with passports and visa)
​
What are the deposit and cancellation policies?
Prices are per person, based on double occupancy and require a non-refundable deposit of $400 per person ($800 per cabin) to lock in your cabin (additional deposit may be required if booking air).  Final payment date is on or before 6/22/19.  No-Interest installment payments are available until final payment date.   ​Other terms and restrictions apply. This Tour is booked through and managed by Mayflower Cruises & Tours and Emerald Waterways and is subject to their terms and conditions (Mayflower Cruises & Tours Terms & Conditions).  Cruise Line reserves the right to change ships, pricing and itinerary at any time. Availability is limited and pricing and cabin category not guaranteed until first deposit is paid.  Please book early to secure best pricing, availability, applicable promotions and cabin selection.
​
Cancellation Policy:
91  days or more prior to departure – Deposit Amount
90 days prior to departure – 100%
Name changes of lead passenger count as a cancellation as do non or partial payment.  Travel Insurance is highly recommended to protect you and your investment.
River Cruise Ship Cabin Selection Tip
CABIN TIP: River cruising is a front row seat to seeing magnificent castles, valleys, gorges, villages, etc. so Cabin location, size and views definitely make a difference in your overall river cruise experience.  We recommend a cabin of at least 180 sq. ft or larger on the highest deck for the best view whenever possible and stretching your budget in other areas of your trip. Please reach out with any questions anytime as our goal is to always have you enjoy your best trip yet!     ​
Oktoberfest Information

Oktoberfest is a world renowned Bucket List event which takes place every year between the end of September and the beginning of October in Munich, Germany. The event goes on for three consecutive weekends and a total of two weeks celebrations.

On this occasion, the area of Theresienwiese turns into a giant amusement park, with the famous “Festhalle”, representing Munich’s historic beer houses, serving rivers of beer night and day.  This is the largest beer festival in the World and draws over 6 million international visitors annually with more than 1 million gallons of beer consumed. Locally, it is often called the Wiesn, after the colloquial name for the fairgrounds, Theresa's meadows (Theresienwiese). The Oktoberfest is an important part of Bavarian culture, having been held since the year 1810. There is a parade to start and end the festival and the first keg is tapped by the mayor of Munich.

There are 14 main beer tents at the Theresienwiese grounds serving brews by the (1-liter stein). Of the 14 tents there are 6 large tents, which rotate up to 12,000 people per day and include music and dancing! Only six breweries are represented at the Oktoberfest grounds - Späten, Augustiner, Paulaner, Hacker-Poschorr, Hofbräu and Löwenbräu. Also, for those of you who fancy a break from the frothy brews there is a special wine tent called Weinzelt.

Besides all the beer tents the Theresienwiese grounds also have one of the largest traveling fairs with lots of rides, games and food for the entire family so there is lots to do for everyone.

Oktoberfest began as a marriage ceremony between Prince Ludwig and Princess Therese on October 12, 1810. All of the townspeople were invited to attend the festival, which took place in the fields outside of the city gates. Following the wedding the fields were named Theresienwiese after the Princess, and the party was such a hit that the townspeople asked King Ludwig to continue the celebration the following year. 201 marked the 208th anniversary of the festivities.
​ 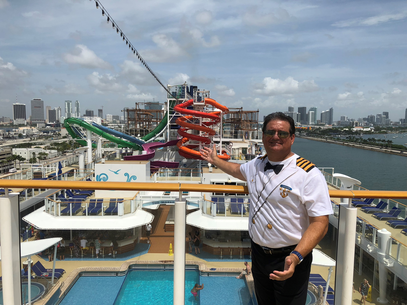 Captain Dan welcomes you onboard
Handouts For Sharing